The shorter you are, the stronger you will have to be

Let’s face it: for short climbers, strength counts more. Unless you have the opportunity to constantly travel to different places to find routes or boulder problems that suit your strengths and your height, you will have to train harder than taller people.

At barely 5’1” with a neutral ape index, I learned early on that the rock generally doesn’t offer equality. Searching for intermediates on my way to the anchors as been, and still is, something I constantly do. Sometimes the way I do moves on routes or boulders is very different than what a taller person would do. And honestly, sometimes what I do is harder than what an average-sized person would do. Short climbers generally have to lock off farther, move dynamically more often, use smaller and intermediate holds. 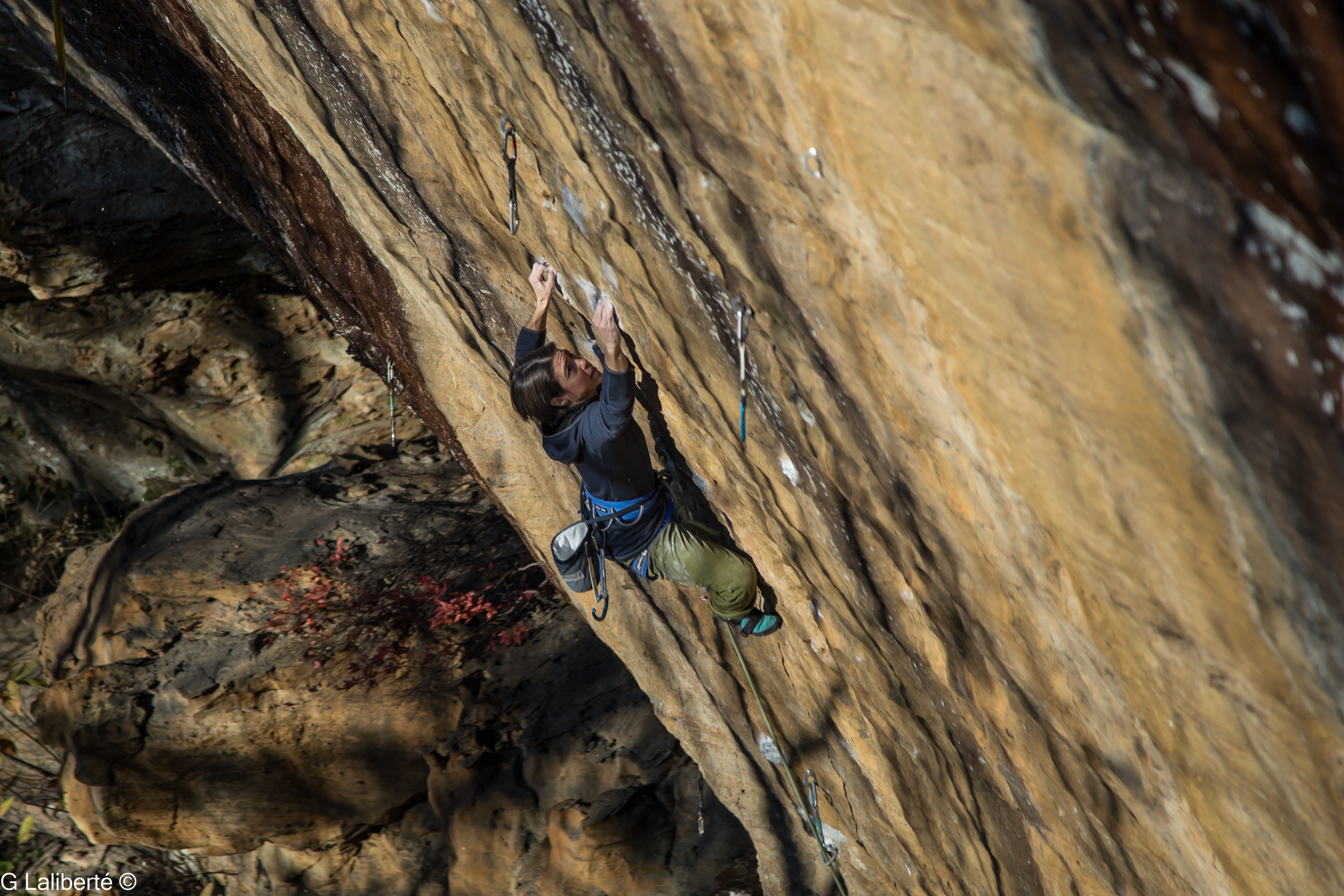 When I started climbing, I quickly realized that I needed to compensate for my height, so I began training specific things to make it less of an issue. Over time, I realized the stronger and more powerful I was, the easier my alternate beta became. In fact, I realized that the stronger I was, the more often I could actually do the taller person beta! Climbing is hard, and at the upper end of our abilities, pushing into new realms requires significant effort and time.

Pushing it in qualification at the World Championship in Paris-Bercy, 2016. Picture by Shane Murdoch.

If you are not willing to put in the effort to compensate for your height, and are constantly making excuses about why you can’t, keep in mind that there are other sports out there that could suit your height better and wouldn’t require you to train as hard. Unfortunately, most of them are not as great has climbing... Trying hard is an intimidating process, and finding excuses helps us to stay in our comfort zone. That said, if you want to succeed, then you have to find a way to deal with excuses, to overcome shortcomings and get better.

I won’t hide that I used to get really frustrated about how much easier climbing seems for taller people. While watching a 5’9” guy casually skip micro crimps and bad feet that are crucial for my short-person sequence on a route and then call the route “soft” while I sent only after grabbing every flake and high-stepping next to my ear, I couldn’t help but wonder: “Would I climb way harder grades if I were taller? Why can’t I experience climbing like most other climbers do?”

Climbing the last crux sequence of Come On (5.14a) at Orford in Quebec my own creative way. Picture by Gabriel Laliberté.

A turning point for me as a climber was when I met Lynn Hill in 2015 in Rifle, CO. I was getting ready to get on a climb I was working at the time called Apocalypse (5.13c). She walked up to me and told me that she had been wanting to try to flash the route for a while, and was wondering if I had any short person beta. The moment I realized I could look at her straight in the eyes without moving my head much, it struck me: she was pretty much my height. At 5’2” with a negative ape index, Lynn Hill definitely has achieved much more than many climbers in her life, regardless of her height. That day I realized that my attitude about being short wasn’t helping me. It was most likely hurting me because I would get angry at the route setters, at taller climbers, and/or at myself and as a result my motivation to try hard would just disappear.

From that day on I started accepting my place in the world as a short person and approaching reachy moves as a challenge that would make me stronger, or puzzles I needed to solve with different beta. If you automatically think you can’t do a climb because it’s too reachy, then you will never do it. Don’t get me wrong, sometimes I give up on super reachy moves and move on to the next climb. But in general, I’ve accepted that I am short and I will have to exert more energy on some moves than a taller person might have to.

Instead of facing the reach problems as unfair punishments, I now approach them with a stubborn openness. I will try a move in several ways, looking for the solution that fits me. I have come to realize over time that through the simple desire to sincerely solve the puzzle, I will most likely find a way. This definitely has become one of the greatest life lessons I could have learned from climbing, one that’s carried over off the rock and in my everyday life.

Setting up for a long move in La Couleur du Vent (5.13b) in Céüse, France. Picture by KappaPhotography.

Shorter people sometimes have the upper hand in climbing. Sometimes.

I’ve gotten into no-hands knee-bars that my taller friends couldn’t think of fitting into. In theory, my shorter lever arm length makes it easier for me to climb on steep terrain. I fit well into certain dihedrals. So there are some advantages.

Having said that, Tom Randall and Ollie Torr of LatticeTraining.com recently completed an assessment of 500 climbers in regards to height and talk about their findings in a podcast interview. Their conclusion is pretty straight forward: The taller you are the less strong and fit you need to be! They explained that this is partly because of the lock-off strength required by a shorter person and partly due to the greater number of moves they’ll have to do to cover the same distance as a taller climber.

[.. ] there is relatively significant supporting evidence that suggests there is a difference in performance required for differing heights, with the taller climbers showing significant advantages in every single area except for core strength.

Randall and Torr revealed another interesting finding in the same podcast: shorter climbers need the strongest fingers for the grade.

A taller climber at the taller end of a normal spectrum requires significantly less finger strength than a much shorter person, regardless of the grade and regardless of weight. So if they’re both climbers who are operating at say, v8, then the taller climber can still climb v8 with less finger strength than someone who is ten centimeters shorter than them.

What I took out of this is simple: for the shorter climber, strength counts more. I need to be fitter and stronger in every other way. Except for core strength, but I train it as well, just in case!

Stretching as far as I can in Taxe Carbonique (5.13d) at Orford in Quebec. Picture by Gabriel Laliberté.

How to Compensate for Your Height

The main areas I train to compensate for my height are below. These are the areas I think short climbers should focus on. My goal here is not to lay out a program, but simply to give an overview on each of them.

Since I started to seriously train a few years ago, I keep focusing on:

In order to reach those big moves, short climbers have to be able to lock-off farther than taller people. Being able to pull a hold down as low as possible, and stay there for a while, is important for us, and needs to be trained. Lock-off strength can be worked on the campus board or by doing weighted pull-ups, for example. However, campusing is unnecessary if you are new to training, if you are just starting out climbing, or if it hurts you to do it. Try using the campus board with feet on at first if you want to start slowly. 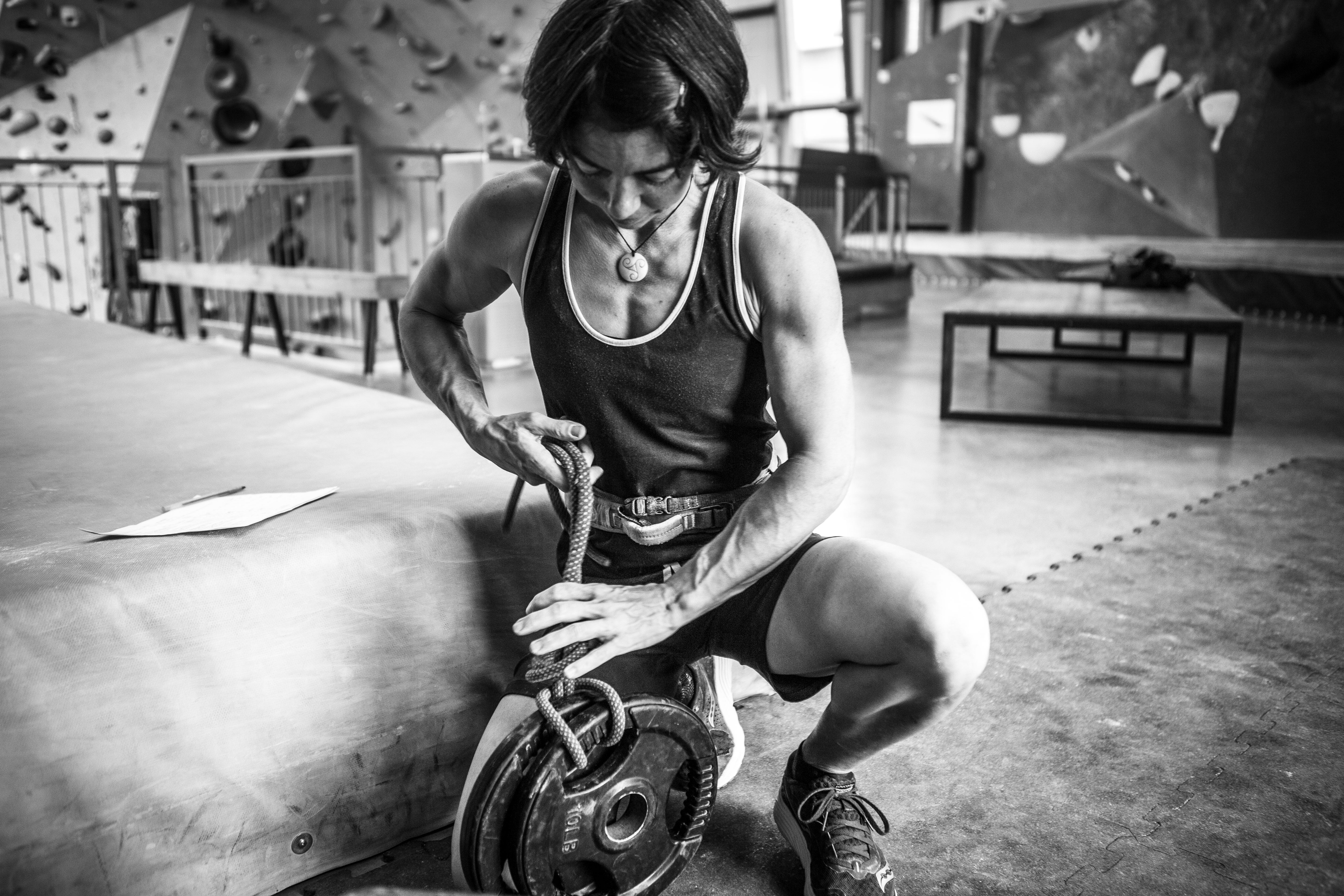 Getting ready for weighted pull-ups. Picture by AT-images.

Climbing on hard-for-you routes and boulders will also help with lock-off strength. Strength-building on the wall should not be underestimated, so make sure you are challenging yourself on reachy and hard moves regularly.

Shorter people need to reach dynamically or jump to holds more often than taller people do, which isn’t surprising. A good way for me to train that is repeatedly trying hard, long moves on boulders and routes. When I get the move, I like to do it again so I get to know and feel my body better each time.

The most important thing I had to change about these moves is my mindset. I used to avoid long moves, and now I face them head-on. I try to figure out subtle body position changes to help me accurately grab holds that are far away. I find that the Moonboard (or any board) is great to train dynamic movements. Again, campusing is another good way to train dynamic movement. I definitely feel a difference in my climbing when I regularly work on it. I get more powerful, more confident, and my contact strength improves.

Working on the campus board. Picture by AT-images.

For short climbers, wide strength is important because we are working at our maximum reach more often than taller people. You have to keep in mind that people are naturally much stronger when their elbows are bent. Therefore, training with our arms wide open is really helpful. It will enable you to engage your shoulders and move off of a hold even when you are extended to a point that your face is touching the wall. Gymnastics rings help to train this (doing flys on them is really helpful for wide strength), but you can also do wide weighted pull-ups and many other exercises.

For all the reasons stated above, having a hangboard routine is super important. I always put my hangboard sessions on the same days as my climbing sessions, either before or after, in order to get proper rest days.

Hanging on the Transgression board. Picture by AT-images.

Core strength allows you to stay tight and pull yourself into the wall more often, instead of just jumping for big moves and not being able to keep tension even if you did grab the hold. There are many ways to train core strength, but I prefer the TRX or the rings and exercises on the bar over mat exercises on your back simply because it feels more like what we do on a climbing wall.

Working on my core... just in case! Picture by AT-images.

The beauty of climbing is that we all do it differently. It is in the differences that we come to express ourselves, our uniqueness, and come to know where our limitations lie.

I am short and I am still learning to deal with it, even after almost 10 years of climbing. Sometimes it sucks, and I still get irritated. But in the end, if you really want something, you put in the work to arrive at the place where you are ready to face the challenge. Life is all about solving problems and overcoming challenges. It’s a pretty unique feeling when you achieve a long move you didn’t think you could do. You can do everything in your power to make those moves possible by training lock-off strength, dynamic movement, wide strength, finger strength and core. Then it’s a matter of choice, and willpower.

Sha Sha (5.14a) at Orford in Quebec, a route I initially thought I couldn’t do because of my height... A lot of hard work and dedication is hiding behind the send of this one!

Can you learn to set in two days?

How can you teach a complex profession, such as route setting, in only two days? We sat down with Flannery Shay-Nemirow to shed light on what is taught in our route setting workshops and what they bring to the community.

Diversity in coaching and gender-based needs in training

After the 2022 Youth World Championships, we discussed with Team Canada coaches Nani Woollings and Bethany Staubitz about diversity in coaching and gender-based needs in training.

A video series about the many stories of women in climbing.